Obfuscation is generally speaking an operation that consists in hiding the meaning of a piece of information, in making it ambiguous, deceiving or just hard to understand.

In the IT context, obfuscation is used to protect the intellectual property of a software in making its source code incomprehensible (for human thought) while keeping it compilable or interpretable for a computer.

Excel-VBA applications are particularly concerned by this issue : VBA source code is embedded in the workbook that contains the application. The password protection to the VBA code is insignificant since a few softwares from the market can open Excel files and are able to give access to the VBA code regardless of the password.

Obfu-VBA does not work straight on the Excel workbook that holds your VBA application. Here are the successive steps needed to obfuscate your application :

2 Export all modules, class modules and userforms from your VBA project into the input folder : your application being opened in Excel, from the Excel VBA editor, do a right-click on each object containing VBA code and select "Export to a file..." (see the figure opposite). Then you can close your workbook.

3 Open in Excel the Obfu-VBA workbook, fullfill needed parameters (see chapter 3.1) and launch the process -that may last several minutes, depending on the size of the files to process.

4 Create a new workbook in Excel, copy if needed the sheets of your former workbook, import from Excel VBA editor the obfuscated objects contained in the output folder.

5 The creation of an obfuscated version of your Excel-VBA application is over. What you have to do then is check it works properly : first save it on the disk, run compiler (VBA editor -> Debug menu -> Compile) and fully test its smooth functioning. 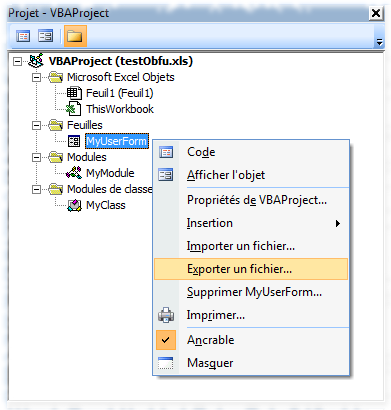 In case of trouble (compilation fails, execution aborts, running does not conform to the original, obfuscation is not thorough), the first thing to do is to check that the recommandations of Obfu-VBA (see chapter 3.5) are followed. Once it is made, you can contact ToolOscope for support or evolution request. 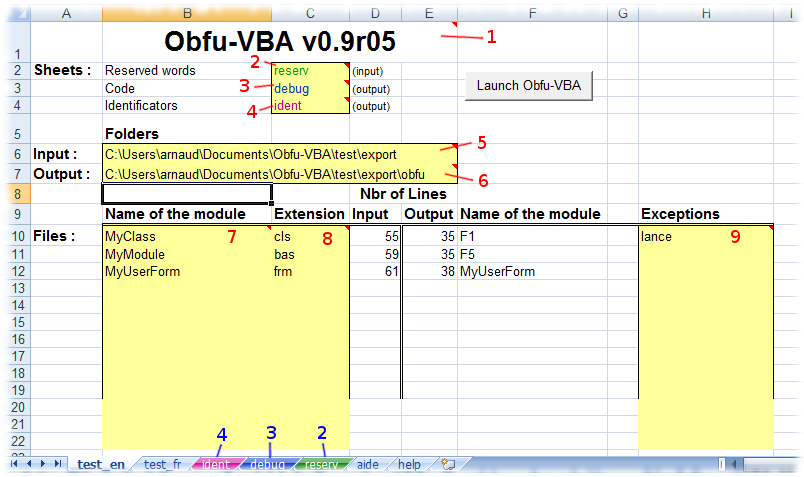 This worksheet is the command interface of Obfu-VBA. Cells to be filled by the user are on yellow background (numbered in red from 2 to 9). Each of these cells has a comment that describes the expected content. These comments are resumed in the frame beside.

Once all input data have been entered, the user clicks on the "Launch Obfu-VBA" button to get process running, in 2 stages.

At each step, Obfu-VBA reads successively all input modules (7) that must be present in the input folder (5). During the second step, obfuscated modules are written in the output folder (6). The user can monitor the progress of the process by looking at the numbers of read and written lines displayed on the worksheet.

You can duplicate that worksheet in the Obfu-VBA workbook, to keep one command sheet per project, for example. So, when you modify the clear source code of your projects and want to obfuscate them again, you won't waste time to parameter folders, modules... in Obfu-VBA.

1 You can duplicate this sheet in the same workbook as many times as you have different VBA projects to process.

2 Fill in the name of the sheet that contains reserved words.
Optional. If blank, reserved words may not be obfuscated as well, but performances may be reduced.
If filled in, the sheet must exist in the same workbook.

3 Fill in the name of the sheet that will show the code and the detected types of variables (65530 maximum lines).
Optional. If blank, the code will not be shown.
If filled in, the sheet must exist in the same workbook.

5 Fill in the path of the folder that contains the VBA files to get processed, previously exported from Excel.
Mandatory.

6 Fill in the path of the folder that will contain the obfuscated VBA files. These files will have to be manually import in a new Excel workbook to rebuild your application.
Mandatory.

7 Fill in this column the names of the VBA files exported from your Excel application, without their extension. These files have to be placed in the "Input" folder.
64 maximum files + memory limit of Excel-VBA projects.

8 Fill in the extension of each VBA file named in the cell to the left :
- cls for ModuleClass,
- bas for Modules,
- frm for UserForms.

9 Fill in this column the identifiers that must not be obfuscated.
Optional.

This optional input worksheet contains reserved key-words of VBA language. It can be improved in case of lacks.

Obfu-VBA analyses each word encountered in the code to process in order to determine if it has to be darkened. This keyword list saves time during processing.

Only the identifiers explicitely declared in your project will be darkened. Therefore, this reserved word list is not discriminatory.

During processing, Obfu-VBA digs out all identifiers declared in your project and relates each identifier to a darkened one. If the name of the mapping table sheet is parametered in the command worksheet, Obfu-VBA returns for each identifier its clear name, its darkened name, its type and its container in the case of a member of a class or a user type, according to its scope (project, module or local).

Obfu-VBA writes on this worksheet (if its name is defined on the command sheet) the read and analysed code - identifiers separated from other characters. Obfu-VBA shows the kind it has detected below each identifier, on 2 lines : label, reserved keyword, variable, function... and the type of the container.

This sheet contains recommandations about the source code to process : 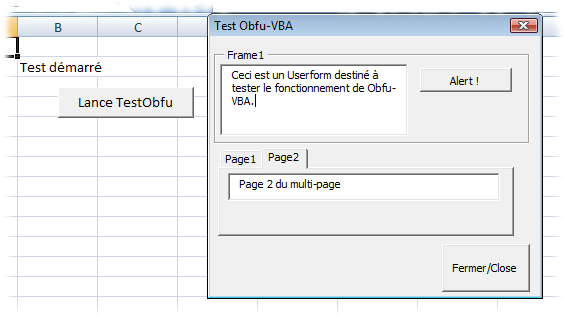 The ObfuTest small application does nothing important and has been written to test and show the functioning of Obfu-VBA. It consists of 1 code module, 1 class module and 1 userform, whose original and obfuscated versions are shown below.

ToolOscope proposes to you a Shareware Licence :

For all this, please go to the User Space.

Don't modify this software, don't broadcast it : ToolOscope manages that.